After what can safely be classified as the most brutal flight of my life (well, so far), we made it to Singapore last night at 7:00 in the evening. Our flight to Kathmandu didn’t fly out until 6:20pm the following day, leaving us to decide, via a long back and forth discussion, if it was actually worth leaving the airport to go into the city and get a hotel room.

Apparently back in his college years, Dean has spent long layovers in the airport and finding a chair, bench, or in some cases floor, crash on for the evening. While I’m always up for some urban camping, sleeping on the floor of an airport is not the way I wanted to kick off this trip. So we compromised with a cheap hotel room in Chinatown, located a quick 10 minute walk from the metro station.

Unfortunately, I hadn’t consider the shape we’d be in after a 16 hour flight (the longest I’ve ever done), which included the soul-crushing screams of four small children in a 7 row cabin. This, compounded by the fact that there was a single drink service during dinner (one glass of wine each), meant that sleep was impossible and we deboarded the plane feeling like the walking dead.

Somehow, we navigated Immigration and Customs, only had one small hiccup in getting on the train, and walked through the night market to our hotel. We crashed at 10:00pm after 22 hours of being awake and slept for a full night on local time (traveling score!).

The best thing about waking up at 6:00am is that you often have the city to yourself, beating other tourists and sometimes locals to breakfast and the coolest sites. We noticed this in Paris last year, when we were awake and getting coffee & quiches at the local patisserie to eat on the steps of Notre Dame as the sun was rising, with only a few other people to share the glory of the moment.

This morning was no different. I spent a few minutes on Yelp, finding a coffee shop that was both open early and had something on the menu that I could eat. Since the local breakfast fair is soft cooked eggs and toast, spread with butter and kaya jam, I struggled as it’s physically impossible for me to eat an egg with a soft yoke (I know it’s weird ok – I just can’t do it). But was lucky to get 2 large pork bao buns and some strong coffee (yes!).

We then decided to hit up one of the major attractions in Chinatown, the Buddha Tooth Relic Buddhist temple. What a treat! We arrived in the middle of a daily devotional that meant the entire sanctuary was filled with monks and worshippers chanting. It was unreal, walking through this beautiful building that had so much beauty and detail, while hearing mesmerizing chants.

We found another sacred room on the third level, complete with meditation platforms and a golden stupa containing one of Buddha’s canine teeth. From there we climbed to a roof top garden that we shared with a singular old man who was reading something on his iPad. Standing there, in front of a massive prayer wheel that rang a small bell, it was difficult to remember that there is a bustling metropolis just beyond the walls and that this peaceful, awe-inspiring feeling wouldn’t last.

I came out of my awestruck fog once the ceremony ended and we walked out of the temple. We then spent the next three hours, walking around downtown Singapore, checking out cool buildings and the riverfront Esplanade park system. That’s one thing I really love about Dean. We don’t need to always have a plan and he can be perfectly content, walking around, looking at cool architecture, and going into the occasional coffee house or concert venue. I realize that my lack of research and planning means that we might miss something super cool during our travels, and I’ve made a commitment to doing a better job prior to getting to new places, but this morning, it just felt right to wander.

We headed back to the hotel for a quick shower (I was soaked in sweat), and a trip to the Michelin starred food stall that earned it’s prestigious award with chicken rice (a Singapore specialty). After checking the location on Google Maps (a mere two blocks from our hotel), we managed to walk up the street without finding it. Now, the cool thing about Smith Street or Food Street as it’s known, is that it’s closed down to traffic and filled, right, left, and middle with food stalls and tables. Normally, I would walk through this hubbub, checking out the stall offerings and most likely, other people’s meals to identify what I want to eat. But we had a plan to find this particular food stall, so the search continued.

On a whim, I decided to take us into the China Market, a HUGE building loaded with individual stalls selling anything you can imagine from underwear to shark fin. Up an escalator, we found ourselves in a place similar to what I imagine heaven to be – a whole story of the building dedicated to food stalls! Like a huge mall food court, but the stalls are packed side by side every ten feet, displaying their different menu wares via picture boards and glass fronted display cases. Obviously, we had to explore and wouldn’t you know, we stumbled across the food stall for the famous Hong Kong Soya Sauce Noodle, our Michelin starred holy grail.

Who knew something so simple as chicken and rice could be so amazing AND cheap – $4.00 Singapore dollars paid for meals. That’s $2.94 US (be still my heart!). After spending $4.00 for fresh pineapple and watermelon juice, we headed to the metro station to hop a train to the airport.

If the last 6 hours is any indication of the possibilities of Singapore, we’ll definitely try to make it back to this beautiful city. And this time, I’ll do some research! 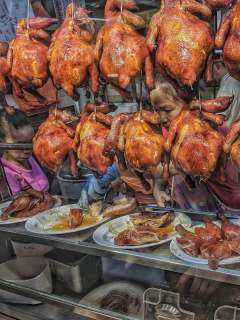