Because Nepal is located at the same latitude as Miami, the seasons are a little different than what we’re accustomed to at home in Colorado. In this small country, comparable in size and shape to Tennessee, the monsoon season begins in early May, bringing with it cloud cover and near daily rain, and lasts until late September/early October.Considering most of my knowledge about Nepal previous to meeting Dean was related to the Himalaya, I imagined a country that was comprised solely of snow covered mountains. Boy was I surprised when we decided to take a quick trip to Pokhara, starting point for most journeys to the Annapurna region and a bustling tourist enclave nestled against a lake among the lush high altitude jungle.

Himalayan Flying – Clouds and Haze Below, Massive Peaks Above

We went to Pokhara on the recommendation of our hotel manager/owner, Sushil, as a diversion since we were unable to get the “reliable” early morning flights to Lukla – the starting point for our trek up to Everest Base Camp – for another 4 days. Sushil kindly put together an itinerary including flights and hotel for our two-day trip however, the night prior, we had gone to dinner with Dean’s close friend, Tsering, who offered to hook us up with a hotel. The only information Tsering had provided about the accommodations was “it’s above the Peace Pagoda, overlooking the lake.” I was a little suspect when Tsering said, “I’ll make a call,” but later that night Dean shrugged and let me know that is the way things happen in Nepal.

We arrived at the airport the next morning, ready for our 9:00am flight and were greeted by sheer mayhem in the domestic airport terminal. Once again, Dean had set my expectations, stating that your ticket may have a flight time, but the flights are often delayed due to inclement weather, plane shortage, air traffic congestion, or overall bad management and there is no obligation by the airline to update travelers as to the number of flights ahead of you or the estimated wait time. With this in mind I sat down to read my book and left Dean to manage the anxiety of figuring out when we would scramble to the bus that would take us to our plane and be airborne.

We arrived in Pokhara two hours later than expected, what I can only assume is a Nepali record. After landing, we grabbed our backpacks and started walking toward the lake, where we would find the area that catered to tourists and hopefully, lunch. Once fed, we decided to meander through the main drag, aptly called Lakeside, and then find a taxi to take us to Raniban Retreat, our Tsering arranged hotel. 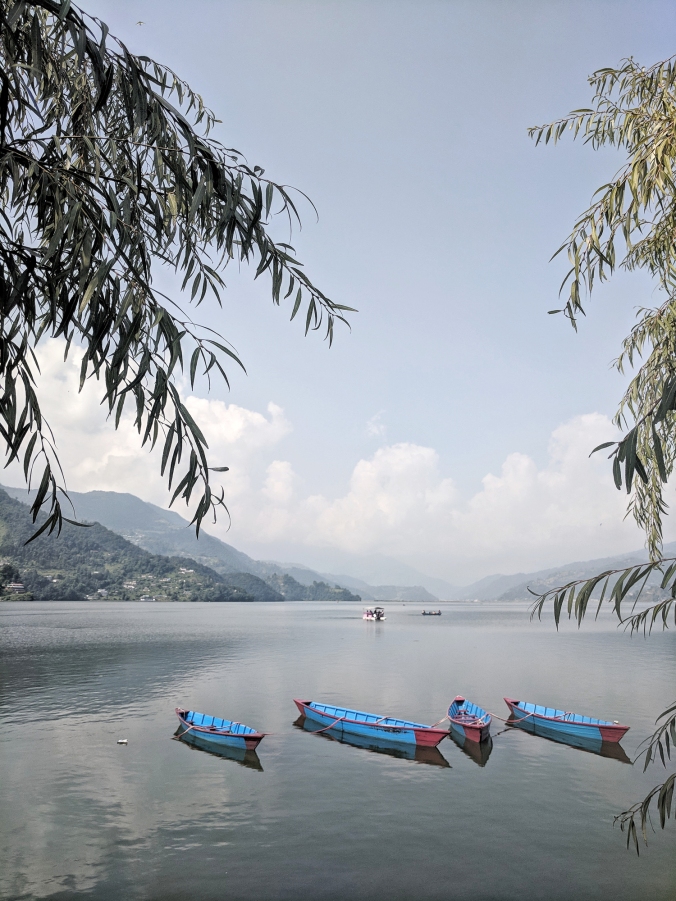 Since Dean speaks a little Nepali, he is responsible for ordering all meals and negotiating for transportation. He walked away from the first taxi driver as they wouldn’t take his original offer, but the guy tracked us down and ushered us into his the standard Nepali cab, a compact maroon hatchback Maruti Suzuki, hovering a mere four inches off the ground. Normally, the clearance of a vehicle is unimportant however in Nepal, where the roads are often a mishmash of pavement and rutted dirt, this can be a critical factor in your journey.

We made an uneventful trip through the town and slowly started climbing the backside of the Raniban hill – crowned by the Peace Pagoda, a famous Japanese Buddhist monument and local landmark and “near” our hotel. I sat in the backseat, looking out the window and enjoying the view of the terraced valley beyond. The enjoyment ended once we made a turn off the paved road and started traversing steep and narrow switchbacks on a rough dirt track. This, my friends, is when the clearance of a vehicle becomes extremely important. At this point our driver started to bottom out, grind gears, and lose traction as he worked his way up the steep cobbly inclines. When we reached a flat spot just above the Peace Pagoda and determined that we were “near” to our hotel, Dean, whose thigh might have been a little bruised from my hard grip, paid our cab driver 1800 rupees, a 30% tip, and we grabbed our bags deciding to tackle the remainder of the hill on foot.

Up the dirt road, about 100 meters, we found the sign to Raniban Retreat painted onto a boulder lodged into the hillside, and started making the 450 step trek up to the top of the hill where we could see several white buildings perched. The climb was worth it. We were rewarded with a view of the entire valley, including all of Pokhara, the lake, and 500 vertical feet below us, the Peace Pagoda.

It was unreal – there’s no other way to describe it. Our hotel room faced due East, promising an unimpeded view of the sunrise from the small patio leading to the French doors. Not to mention, our bed was scattered with flower petals in the shape of a heart, flanked by towel swans. Seriously Tsering? Awesome!

The next morning we got up at 5:30am and were rewarded with a valley covered in a blanket of undulating fog. Scrambling out of bed we made a quick trip up to the elevated restaurant roof and sat in awe for over an hour, watching the sky lighten, the fog breath, and occasionally, catching a glimpse of pink Himalayan peaks through the humidity. Remember when I said that Pokhara is the starting point for trekkers headed to Annapurna? Well, it turns out that there is a range of extremely high peaks (2 of the 10 highest in the world) within view and the only thing obscuring them at this time of year is a hazy layer of humidity, providing us with just enough of a teaser to ensure that we make the pilgrimage back during the winter months so that we can see the towering peaks in full.

Alpenglow Sunset on Annapurna over Lake Phewa and Pokhara

We learned that the Nepali word for “peace” is “santi,” and santi is exactly what we felt as we listened to the birds and marveled at the beauty of this place. If we would have stayed at the hotel located down by the lake, we would have been socked in the fog and missed the uniqueness of this experience. We made a pact right there that we would seek the road less traveled – a pirate’s code to try and find places that are off the beaten path in the search to find a more unique experience. 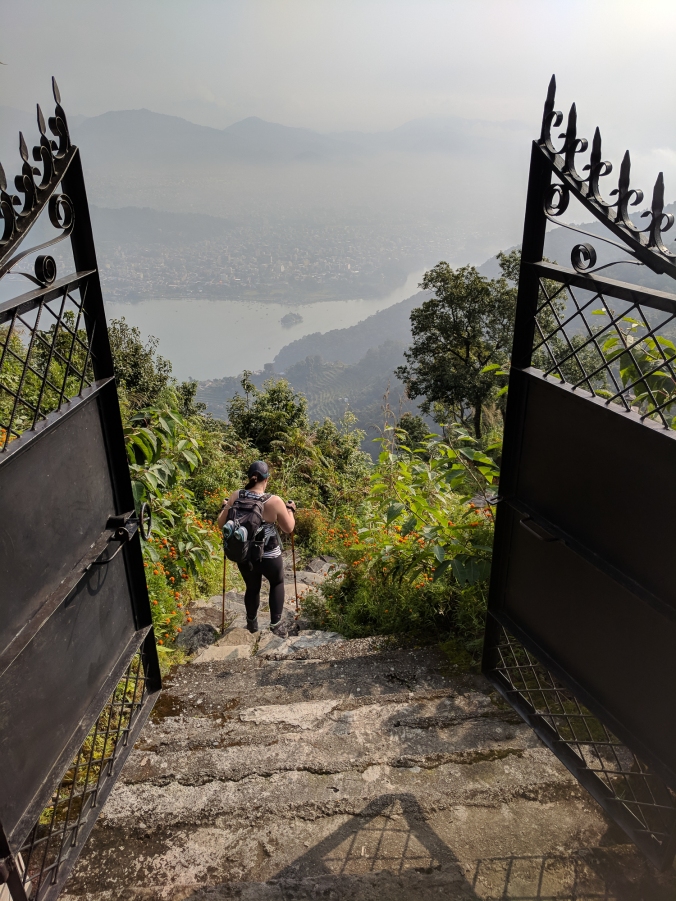 Hiking Out of Paradise

Will we always succeed? Probably not. But we’re going to work hard to do our research. Because if we can find places like Raniban on our own, this is going to be one hell of a year!

2 thoughts on “Waking Up Above the Clouds”